The Origins of Letterpress Printing and How It’s Changed 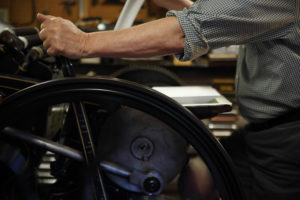 The elegance of letterpress printing comes from a long span of centuries. Letterpress, which initially utilized raised metal type and engravings to imprint words and designs, is responsible for the remarkable marketing of many companies. Additionally, the aesthetic of letterpress has been seen in many famous movies due to its ageless and flawless look! It’s undeniable that letterpress printing has the power to attract the eyes of customers, business owners, partnerships, and many others. We take a look at how letterpress came to be and how it’s revolutionized over the years.

The Beginning—With Thanks to Johann Gutenberg

When Johann Gutenberg invented the printing press in the 15th century, his goal was to provide the population of common people with books. In the decades preceding the 1440s, the printing of any kind required craftsmen to carve entire pages of text into wooden blocks—modern-day printers can’t imagine having to do this amount of labor. Once the text was carved, the space surrounding the letters had to be whittled away so that the text was the only surface that would touch the page. The blocks would then be inked and paper would be placed on top, rubbing the paper onto the wood would create an impression. This was a rather time-consuming and difficult process.

Gutenberg’s first forays, between the 1430s and 1440s, were through his own version of wood-block printing, with individual, reusable letters carved into wood blocks instead of entire words or pages. This allowed for a movable type, where individual letters could be used to form words for one page of print, then taken apart and re-ordered to create the next. The wooden letters failed to print with clarity, so Gutenberg began working with metal type instead.

Typeface designer and gunsmith, William Caslon, created a type of print that was legible and distinct, which became popular for use in printing important documents. After his passing, Caslon’s typeface was used in the printing of the United States’ Declaration of Independence in 1776, which was distributed amongst the states.

Individuals were constantly on the search to find new ways to improve the look of the printed page over the decades. In the 18th century, printer and typographer John Baskerville created a way to make paper more pasty and smooth so that in printing, the ink would show up strong and crisp. He was also the pioneer for adding wide margins to the printed page, as well as spacing between lines of text.

The Hallmark of Offset Printing

Offset printing came about by accident in 1903. American printer Ira Washington Rubel owned a lithograph press, and when he failed to insert the paper, the stone plate’s image transferred onto the rubber cylinder used to make the impression. Rubel was surprised to find that the image from the cylinder was significantly sharper than the image from the stone litho plate. It wasn’t for another few decades that offset printing began to gather momentum.

Within 50 years of the rise of lithography, offset lithography and digital printing had taken over the scene. By the 1950s, offset printing was the most popular method of commercial printing.

Letterpress and How It Looks Today

In the late 1980s, letterpress printing had its own revival among small printers who still wanted that tactile, quality feel that offset printing could never provide. However, it wasn’t until the 1990s that this method of printing became popular among individuals for their personal printing needs. It was around this same time when Martha Stewart Weddings letterpress wedding invitations, sparked a renewed interest in the printing method.

Original letterpress printers used a “kiss” method of printing; that is, the press only touched the paper enough to transfer the ink. Modern letterpress enthusiasts, however, have been interested in implementing deep impressions within the paper materials, which is more commonly referred to as “debossing”. It’s not hard to see why this method has been popularized, as it manifests a beautiful, imprinted work of art rather than just a printed page.

While some printers still utilize Gutenberg’s method of individual characters to print letterpress, others have embraced digital methods that make the process simpler. Nonetheless, letterpress is used for all kinds of work and projects, and all they all come out just as authentic and crisp.

Utilize the Best Methods of Design With Universal Graphics

Here at Universal Graphics, we care about the success and demand of your business. Even more, we understand that success is often tied to how you present and market your company. Contact us today to learn more about how our graphic services can help you attract more customer interaction and revenue.

« The Power of Color and Images: Famous Commercial Banners and Ads
COVID-19: How To Protect Yourself and Others  »

Contact Us Today. Come by and visit us at the print shop! If you have questions about any of our services or how we can help your business please give us a call 915-591-8943. We look forward to serving you.